Why Your Call Centre Should Have Low Average Speed of Answer A call centre’s success is dependent entirely on what quality of customer experience it offers to its audience. To measure the service quality, there are few metrics which have been set in place to generate an idea about where a call centre stands among the competition. One of the most critical criteria that says it all about a call centre is the Average Speed to Answer (ASA). This self-defining metric of quality is what we’ll be discussing in detail in this article.

ASA for a call centre can either make or break their path towards success. ASA tells the consumers how reliable, quick and efficient a call centre can be when it comes to delivering quick answers to customers. It is measured as the average time it takes for a call centre to answer incoming calls. The most idealistic call centres have the lowest ASA numbers which mean that they can reply to a customer inquiry almost instantaneously.

How To Find ASA For A Call Centre?

Finding the ASA for a call centre is as easy as calculating the average of the waiting duration within calls. For example, if there was a total waiting period of 30 minutes of 10 incoming calls, the ASA can be denoted as 30/10 which comes out to be 3 minutes of average waiting time for answering an incoming call. As it might be obvious, higher ASA numbers mean that a call centre takes more time to answer calls than what is desired and hence, speaks of their unreliability.

How Can A Low ASA Benefit You?

There are innumerable benefits to boast a low ASA score. Some of which are detailed as follows:-

Abandonment Rate, in regards to a call centre, is defined as the number of incoming calls that are dropped before their query gets resolved. It is crucial to have low abandonment rates to provide a better customer experience. If a call centre has a low ASA number, then it technically means that they take relatively less time to answer an incoming call which further means that there are fewer calls being abandoned.

If a call centre has a low ASA score, then it means that there are more than enough employees engaged in answering incoming phone calls. Since the more a call has to wait before being answered, the more are the costs that the call centre has to bear to sort out the long waiting queues. A higher ASA number can be a probable sign that a call centre requires more hands behind the company to function properly.

The more a customer has to wait in the queue to get their query answered, the more frustrated or angry they will become. It’ll always take longer to end a frustrated customer’s call since they initially need to be pacified before they can clearly express their queries. This adds to the on-call durations which ultimately leads to longer waiting queues for other customers. The cycle repeats itself with every frustrated customer. Hence, a lower ASA is considered ideal to reduce total on-call durations and by further derivation, simplify the entire process of answering calls.

When the agents don’t have to deal with frustrated customers, it increases their level of work satisfaction. This increase in satisfaction among employees implies a reduced number of unhappy agents which ultimately means more hands are answering calls. Moreover, if the employees are satisfied with the workspace, they inevitably will give in the best of their efforts towards their work which also mean increased customer satisfaction.

First Call Resolution (FCR) is defined as the situation where a customer’s query is answered within the first call they make to the call centre. A better FCR rate essentially symbolises that a call centre agents are well-versed with the frequent queries and are capable enough of solving them within the first attempt.

Since a lower ASA number means less frustrated customers, agents can clearly understand their problem and therefore, can come up with an appropriate solution. Since customers prefer calling in when there is a high FCR rate, a lower ASA score becomes ideal in this scenario.

When an agent doesn’t have to divert their focus on pacifying customers, they can strategise their efforts in solving customer’s query.

How to Decrease overall ASA?

Reducing ASA demands consistent efforts and dedication. The following are a few steps that, if followed diligently, are efficient in reducing ASA significantly:-

A high ASA can be a probable cause of an understaffed company. The only solution to the same would be to hire more reliable agents into your company.

A high ASA can also mean unsatisfactory performance of few agents. As a solution, one should implement mock tests that simulate a conversational environment like that of answering an actual query of a customer. This helps to analyse each agents’ reply towards a specific query from the customer and hence, would help you to pinpoint the root of the inefficiency.

You should ensure that incoming calls are directed to agents in a fair manner and not all towards a single agent. By ensuring this, you would be distributing the calls equally among the employees who can then answer calls within the minimum period.

Within advancing technology, one should embrace every enhancement towards in the current technology and should be open about implementing change for the better. A prime example would be the use of artificially intelligent bots to answer the frequently asked questions for the customers which only redirects the call to a human agent if requested so by the customer. This would significantly reduce the waiting queue and will further improve the ASA scores.

An extensive training session for the agents before they directly come in contact of the customers can go a long way. Agents without an appropriate training program would usually have difficulty in answering a customers’ query within the first call which drastically effects the FCR rate of a call centre and hence, takes a toll on the ASA scores. Therefore, an exhaustive training program for the agents is essential to maintain a low ASA score. 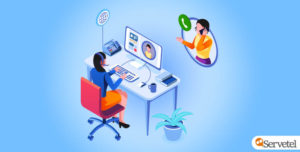 Outbound Calling—Everything You Need To Know