While running a marketing campaign, businesses need to reach out to a large number of customers in a short span. At present, voice broadcasting is one of the widely used mass communication techniques that is connecting companies with its target audience.

Wikipedia defines voice broadcasting as a

Mass communication technique which broadcasts pre-recorded voice messages to thousands of call recipients at once.

At the same time, the non-profits organisation use voice broadcasting solutions to convey a variety of information to their members, subscribers and donors. Voice broadcasting solution enables people to record and send voice messages in bulk without investing in hardware-based infrastructure. It further comes with robust features that help to monitor and boost the performance of voice campaigns.

While using mass communication technologies, many organisations opt for SMS or text messages due to their extremely high open rate. But decision-makers must remember that more and more people these days are using voice messages to communicate on mobile apps like Facebook Messenger and WhatsApp. Market research also suggests that voice messaging is going to be the next big thing in the upcoming years.

Campaign managers can create voice messages and personalise them in several ways. They can pick the predefined message scripts from the portal or can type in their personalised message by adding a company’s or customer’s name.

Along with the script, managers can also pick from the existing voice samples or can upload a new voice recording. They can also use the in-built text-to-speech feature to generate dynamic voice samples by altering the script.

On the contrary, voice broadcasting allows a business to send the same voice message to thousands of customers with zero chances of consistency failure. Hence, it helps marketers to maintain uniformity and consistency of the campaign message.

6. Do not Violate DNC Rules and Regulations

Many customers have do-not-call (DNC) or do-not-disturb (DND) service activated to avoid receiving commercial messages and calls. While running voice or telemarketing campaigns, businesses need to ensure that no call is made to phone numbers which are on DNC registry. If companies fail to do so, the repercussions can be massive, that can result in hefty fines. Voice broadcasting software takes care of this for you. While uploading your contact list, the software automatically eliminates the DNC contacts from the list.

Cloud-hosted voice broadcasting solutions can run multiple voice campaigns simultaneously. Managers can monitor the performance of every campaign on a web-based portal. Also, they can generate campaign reports based on real-time data and send the campaign reports to various stakeholders regularly.

Outbound campaigns require organisations to deploy additional agents. Also, it is tedious for agents to contact a large number of customers and convey the message manually. Voice broadcasting software helps organisations to run marketing campaigns by sending the same promotional or campaign messages to thousands of customers and leads at once. Hence, many businesses these days use voice broadcasting as a direct marketing tool to run marketing campaigns without investing in extra resources. 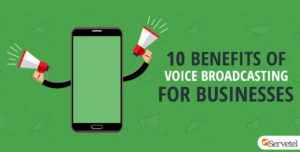 Top 10 Benefits of Voice Broadcasting for a Business [Infographic]