IVR surveys are designed to receive feedback on the working of an organisation. Potential audience for these surveys is majorly the existing customers using the product.

Although, IVR surveys are a consistent and proven way to understand customers expectation, but if not appropriately managed these can render biased and unmeaningful data. Here are a few tips which can help you build highly engaging IVR surveys ensuring you gather accurate data from the right target audience.

1. Define and Identify the Goal

“Why” is the most important question one should ask when designing an IVR survey.

The reason for the survey should be crystal clear. Two main questions which should be clear while designing an IVR survey are:

The former is important. After all, it defines the fundamental requirement behind the survey. But, without the latter, the survey has little meaning. You should never forgo your organisations’ motto when designing the roadmap of survey.  Every survey organised should act as a catalyst towards achieving and following the vision.

Identifying the goal is the primary objective of a survey. Determining who is it aimed at and why is important in planning and designing the survey. It’s only after the goal has been identified that the designing of the survey can begin. Defining and identifying the goal go hand in hand. Therefore, immense care should be taken during this initial stage.

2. Designing Questions Is an Art

For any successful IVR survey, the questions are the heart and soul. Designing such questions is an art. However, certain standards must be followed when designing IVR survey questions. The objective of an IVR survey is to gather accurate data.  The tone of the question can coax the type of answer provided by the responder. Under such circumstances, a survey bears little meaning and relevance.

Thus, questions should be objective in nature to ensure that the answers received comes without biasedness.

Another important factor in designing an IVR questionnaire is to order questions logically. When ordered in the right manner, it sets the right tone of the survey. Well-designed questionnaire is self-sufficient to walk through the objectives. The first few questions should be general screening questions, preferably, questions prompting one-word “yes/no” answers. These may then be followed by descriptive or open-ended questions, giving detailed insights about the person’s opinions. Lastly, the survey should end with demographic questions; these are integrated with CRM to capture response in the database.

4. The “Keep It Simple Stupid” strategy

Great scientist Nicholas Tesla once said, “The scientists of today think deeply instead of clearly. One must be sane to think clearly, but one can think deeply, and be quite insane.” This seemingly simple quotation has deep implications. It implies that a thought process should bear clarity. It’s easy to lose the motto when one dwells into the depth of scenarios. This is perhaps the reason behind the US Navy’s “KISS” (keep it simple stupid) strategy.

When creating an IVR survey, one should ensure clarity above all else. Customers are comfortable answering questions that have a clear, precise objective. Haphazardly quoted deep questions make people lose interest. This results in dropped-off surveys.

Answers to an IVR survey are often scale-based. For instance, let’s consider the question: On a scale of 1 to 7, how much do you like our service. Such questions often end up getting a different response based on a customer’s perception of merit.

Two customers with the same likeliness can deliver varying answers, as two people might weigh numbers differently. To avoid such scenarios, a proper scale must be developed. Since answers in an IVR survey are given by passing a digit, thus the need to have a robust scale of alternatives is imperative.

When considering a dataset in the survey, it is crucial that the volume of dataset be optimised. In a large dataset, the possibility of randomness increases. For instance, when the rating of a service should be given from 1 to 7, the average rating provided by large dataset will near around 4&5. This is due to the reason that most people prefer to avoid giving extreme ratings. Thus, 1 & 7 are an unlike option. And the average rating is delivered between 2 to 6.

There are two steps to solve this issue.

It is important that ambiguity is removed from an IVR survey. There are two main reasons for it. Firstly, a customer may misinterpret a question. Due to this, the customer’s answer may not be what question was intended for. This results in an insignificant answer that misleads the survey. Secondly, a customer may get confused. This results in customer dropping out of the survey. Either of these cases spoils the whole point behind the survey. Therefore, it is vital to have no ambiguity in your survey.

Industry jargons refer to technical terms that are alternatively used by the industry people of any industry. These words may not be understood by the general audience. When conducting an IVR survey, it is important that such terminologies be avoided. These terms may cause frustration and loss of interest among customers.

When conducting an IVR survey, it must be a general practice to pre-test the survey over a sample audience. This allows figuring discrepancies if any. It also helps to get a brief idea about the variability of the answers and ambiguity, if any exists. With this, all discrepancies can be tackled before performing the actual IVR survey.

The best way to generate customers is to make them feel valued. A customer takes a survey to add value to the services they receive. Therefore, it is a practice of entitling faith among customers. When a survey is completed, an organisation must share the findings they uncovered during the survey. This makes customers feel valued for their time.

When the actions to be taken are disclosed, the participants feel they have made an impact. This encourages them to participate in upcoming surveys, hence generate loyalty.

Indeed, IVR surveys are a certified way to accumulate data. But the quality of data is largely dependent upon the way these ivr surveys are organized. To get the most out of the resources used in conducting IVR surveys, it is important that immense care be taken when conducting surveys.

Create effective IVRs with Servetel. Start your free trial today by calling us at 1800-120-4132 today. 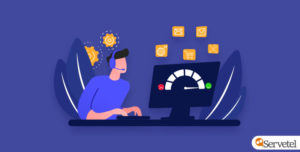 Tips for Delivering Outstanding Phone Experiences to Your Customers [Infographic]

About the author: Vishesh K. Srivastava

Vishesh K. Srivastava is adept at content creation and marketing. He is a writing strategist at Servetel, whose interests stretch from technical to philosophical ops. Being swayed especially by cloud and AI technology, the craving to discern has led him to explore even the likes of theoretical physics and graphology. On his quest to discover himself, he feeds his curiosity through extensive research, while allowing intuition to decide where he lands next. To explore more about him, you can follow him on: Facebook, LinkedIn