The technology that was once considered a luxury is now part of our daily lives. So naturally, humans have become reliant on innovations that make life easier. Considering how much modern customers value technology, businesses today are strongly driven towards digitalisation.

The telephonic customer service industry tops the list of technologies that tend to evolve with the times. It has undergone massive transformations just in the past few years. Ironically, ‘call centres’ are no longer limited to telephone operations—they’ve evolved into the notion of ‘contact’ centres that are much more inclusive and expansive with multimedia communication channels.

You can now reach out to an organisation via several platforms, including emails, chats, websites, instant messaging, and social media. This doesn’t mean telephone operations have ceased completely. They have, however, altered to fit a new role. Before we discuss the status of call-based customer service in the world today, let’s first review its evolution.

The Times of The Telephone

The term ‘call centre’ was first coined in 1983 to refer to service for consumers to get instant answers to their queries and increase control over transactions and their follow-ups. Before this service came up,  consumers had to interact face-to-face for all queries. Of course, this wasn’t always possible especially when dealing with large firms.

Thus, even in their initial phase, call centres were revolutionary as they provided a medium for consumers to connect and build relationships with large brands. With the gradual introduction of other inventions in the telephony industry, such as toll-free numbers and IVR (Interactive Voice Response), more control was handed over to the consumers. This incentivised them to make use of customer care services more often.

In the mid-90s, the Internet quickly came, saw and conquered the world. Now people could get everything, big or small, done online from the comfort of their homes—something that was unimaginable previously. While the initial features and usage of a Web connection were quite limited, in a little over two decades, it has transformed with rapid velocity.

As the Internet gained popularity, people started getting frustrated with certain limitations of telephony systems. For example, wait times were very long in traditional call centres because of fewer service representatives. This made the experience extremely slow and cumbersome for both parties.

In fact, you may remember scenes from several 90s sitcoms that made fun of customer service calls, showing characters waiting by the phone for hours. As people started recognising the greater capabilities of the Internet, we saw a considerable decline in the popularity of telephone systems.

In the past decade, the importance of the Internet has skyrocketed. Everything, from purchasing products and connecting with friends to playing games and watching content has gone online. With Web services streamlining our daily chores, industries are increasingly digitising and digitalising their services, especially in the realm of customer support.

We’re now presented with several alternatives to the outdated telephony system—chatbots, websites, live chat, self-service menus, and social media. These options are not only easy-to-use and instantaneous but also make consumers self-sufficient. The cloud based telephony system was a clear winner over the slow and tedious telephonic conversations.

Hence, one can accredit the evolution of the telephony system to the high consumer expectations resulting from rapid technological advances.

The Final Stage of Telephonic Conversation

Does the introduction of Internet-based platforms imply the demise of telephony systems? Absolutely not.

Though 90% of customers expect organisations to provide an online portal for communication (Microsoft, 2017), 48% of customers still prefer calling customer service executives, according to Hubspot Research.

Call centres have assumed responsibility for handling complex requests and queries with human aid. For example, when a client poses a query on an online chat, AI tries to resolve the issue from its fed database, but if the matter is too complicated, it delegates and forwards the query to a live agent.

Thus, phone systems in customer service have adapted to specialised roles. Instead of handling all kinds of queries, these systems just deal with the major complaints. This may sound like the downfall of telephonic conversations but is in fact an ideal scenario. Due to the split of queries amongst various channels, telephony systems are fairly liberated and agents can focus their time and energy on crucial requests.

In the past, customer care was considered a game of speed—the faster a call is received, the better. However, over time, we’ve recognised the importance of experience over speed.

There is also an increasing emphasis on a skill-based categorisation of queries and complaints. Instead of continuously transferring callers from one department to another (as was the case previously), new phone capabilities allow you to intelligently route calls to the best-suited agent or department. Moreover, the introduction of cloud-based IVR has made first-point resolution more achievable than ever.

The Need for Omnichannel Integration

Cloud solutions offer dynamic features that increase efficiency and accuracy of customer experience. With omnichannel integration, the whole process is as smooth as butter.

Let’s take an example. When a client connects to an agent after a live chat, the representative can review all the information already entered. Multichannel integrations allow seamless interactions between customers and support centres. Cloud telephony systems are also equipped with transformative features such as text-to-speech and vice-versa data conversion, AI-powered IVR, voice broadcasting, etc.

A NICE inContact report shows that 9 out of 10 people wish for absolute omnichannel integration. This means that companies need to strive to make the transition from one medium to another as smooth as possible. This can only be achieved with cloud solutions and artificial intelligence in tow.

We’ve often heard the saying, “the only constant is change.” Trends come and go, and we constantly evolve. Telephonic conversations were once the most popular means of communication. However, now they have paved the way to more advanced techniques and platforms.

The rise in digital media has not made telephones obsolete but simply altered their function in customer service. Instead of being the first option of communication, it is now the last resort for specialised and complicated requests. People still seek help from human agents; they are just less common.

Make your telephony system easier to use by integrating IVR (Interactive Voice Response) by Servetel, and much more. Contact 1800-120-4132 to get started. 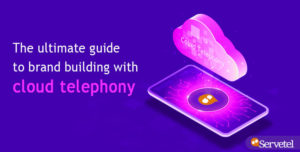 The Ultimate Guide to Brand Building with Cloud Telephony 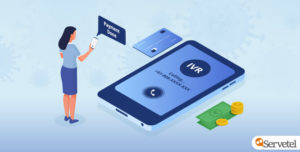 About the author: Editor

Servetel provides a wide range of cloud communication services to businesses of all sizes, which includes Toll-Free Numbers, Virtual Numbers, and IVR Solutions. Being a leading cloud telephony service provider, we revolutionise the way businesses communicate.